In order to get my point across, this article will be full of spoilers for Star Wars The Last Jedi.

Art is said to be inherently political. The audience of the time is getting a specific message from the author. That message is rooted in the common culture of the time and place that art is beng made. Let’s explore that because I think Rian Johnson makes a nuanced, counter-culture plead to a very vocal crowd.

I think Rian Johnson wants people to look at those who they view as enemies and try to see them as people. I know that may sound radical to some people, but I agree with him. That doesn’t mean we let bad people who are taking bad actions and actively trying to hurt people, do so unopposed. That doesn’t mean that we are weak, either. It is possible to hold on to one’s morality and principles, while hearing other people’s perspectives. Being receptive and listening to others helps them lower their guard and often leads to them being interested in hearing the other side. Sharing ideas with an ideological opponent in a way that actually appeals to them can have a greater impact on them than a punch or kick, which will simply fade in time.

We do not know the pathology or reasons why Ben Solo abandoned Luke’s Jedi Temple and joined Snoke and the First Order. We know that Snoke is known to, at least, Luke; Leia; Han and Ben. What type of figure was he before he publicly became the supreme leader of the First Order? We do not know. But according to the movies, he had somehow been influencing Ben for a long time before Luke confronted him and sparked his flight to the First Order. Ben solo had a mother and father to go home to. After he defended himself from his uncle, he could have explained the situation to his fellow Jedi Learners and peacefully left and gone home. Why didn’t he? Again, we have not been given enough information to work this out, so we will have to work with what we know and what seems reasonable to us.

At this point, understanding Ben Solo’s mindset is beyond us. What about Luke, what made him consider murdering his nephew in cold-blood? He says he saw a great darkness in Ben’s heart. While he slept he read his feelings or thoughts and could also see a future where Ben would inflict great suffering and pain on many people. Luke did not want to let that happen. He had lived in the aftermath of a powerful Jedi turning to the dark side and pushing the Galaxy into a terribly imbalanced state, where in near endless war across the stars finally resulted in a relatively brief period of peace. Luke would not want other people to suffer the way he and his allies and so many other innocence had before. Luke tells Rey that he failed when he considered murdering Ben. Yoda appears to Luke later and tells him that failure is one of the greatest teachers. Luke except his failure and is able to move on from it. He cannot undo the past, but he can help protect others who will go into the future and do what’s right, even when it is difficult for them.

Rey learns a similar lesson. She sees that the quick and easy path is not the path that she wants to walk down. When she first sees Kylo Ren she attempts to shoot him and kill him. He is taken aback, he didn’t know she was there. I wonder if she was going to shoot him in the back, that would put her in Luke in the same place, faced with the same choice and both making the same mistake. At this point and Kylo Ren is an active murderer and agent of an oppressive government, so I can understand her willingness to take the cheap shot on him more than I can Luke. In time and through their conversations, Rey begins to see the human side of Kylo Ren. She starts fighting to redeem Ben Solo and bring him back to the light. She puts herself in danger and holds out hope as long as she can. With Rey’s help, Ren rids himself of one of the most toxic influence in his life. He then asks her to join him and destroy all the relics of the past, so that together, they can make a new future. His contempt for what he sees as wrong blinds him to his path towards a bright future, founded on wholeness. He can only see conquest and domination as the key to changing the world for the better.

Luke tells Leia he is going to face Kylo Ren, but he won’t be saving Ben Solo. There is another message here. Luke can’t save him by fighting him. I think Luke is trusting in Rey to bridge the gap and redeem him, if possible. If she can’t, if she fails to help Ben see the light and choose a different path, that is ok. Ben makes his own decisions and if he continues to choose to turn his back on people who offer him redemption and peace, that is on him. When he continues to act to murder and oppress people, I am sure Rey will do all she can to stop him.

In Star Wars, the kids are alright and the older generation is chiefly responsible for the sorry state of the Galaxy. It holds true for this sequel trilogy. 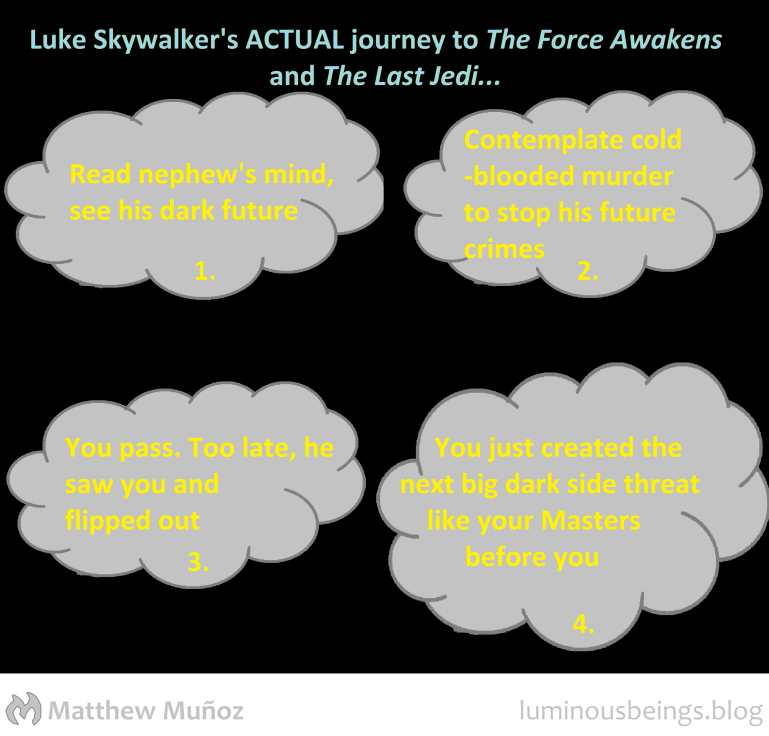 Luke “punched a Nazi” and look what it got him. He tried to preemptively destroy the evil he saw brewing in Ben and it lead to so much suffering.

Rose Tico said: We are going to win by saving what we love. Rose, Finn, Poe and Rey are people I can see living out that ethic and I am excited to watch it.