As I reflect on the second episode of Black Lightning, a few things stand out to me. I was looking for a theme or topic being handled and can’t pull one out. Instead, I see echoes and rhymes that all reflect on each other and build on each other. I wanted to say that these all build up towards Jeff deciding to make the statement that black lightning is back by taking down Lala, but that doesn’t really feel like the truth.

Black Lightning’s structure isn’t so simple and straightforward, but it feels like it is. I think four ideas are central to the internal realities of the characters and they naturally progress culminating in Black Lightning attacking Lala. Actions have consequences. Trauma must be coped with so it doesn’t destroy you. Resolve can be noble or foolish, depending on your point of view. Love has its time and place. It feels like Jefferson is wrestling with processing these ideas and we get to see the others echoing what is going on with him until it all comes together at the end when he resolves to keep on fighting.

Pierce is content to have saved his daughters and leave the rest to the police. At school, concerned parents confront him with the fact that The 100 still represent serious danger to their kids on school grounds. They also wonder why Black Lightning only saved his daughters. We also saw a TV pundit admonish Brother Lightning that he continue to strike wherever he needs to in Freeland. Jefferson is faced with the fact that being Black Lightning once and only when his family is threatened will do nothing to help the community at large. They have been hurt by his failure to act. Lawanda White has a daughter taken in as a prostitute by The 100 and he resists having Black Lightning help her because the gang resumed their operation after he attacked the Seahorse Motel. The people in Freeland exist outside of Black Lightning’s superheroics, as do the gangs. There is a constant level of threat that is present whether or not Pierce acts to oppose it.

Pierce seems to be suffering from power surging through his body. Lynn is there to help him through it and she seems to be the cure for his pain. This is echoed in how Anissa and Jennifer are trying to get over their trauma from being abducted by Will. Jennifer turns to alcohol and “wild” behavior, while Anissa turns to her lover. It’s interesting to me that the Pierce girls indulge in pleasures to help themselves while Jeff and Lynn don’t do more than kiss.

Lawanda White is dealing with the loss of her daughter through activism. She works all the legal and social angles she can as she struggles to get her daughter away from The 100.

Lynn and Gambi have a great conversation that basically ends in them agreeing that the other is wrong about what Jeff is doing and his motivation. Lynn, as a neuroscientist is certain that her ex-husband has become addicted to using his powers. Gambi claims Pierce was addicted to her and that’s why he stopped being Black Lightning as soon as she gave him the choice to be with her or be Black Lightning. He sees Black Lightning as a calling Jefferson is right to answer. He sees his possibly unending battle as a virtue while Lynn calls it a vice. Jeff is reluctant to return to that life, but considers whether or not it would viable to be Black Lightning and have an intact family.

Khalil and Jennifer were long time friends. His concern and care for her and his romantic interest in her seems to have brought her back from the self-destructive path she had chosen in the aftermath of her abduction.

Lawanda White loved her dead husband and loved her daughter till she was murdered by Lala for the nuisance she had become. She had no legal or physical power to free her daughter from The 100, but she stood up to a dangerous man to do it.

Jefferson Pierce loves his ex-wife and his daughters. He loves his the students and his community. His love for his wife stopped him from being Black Lightning for nine years. As he has an opportunity to be back with his wife, he is willing to sacrifice that possibility for the sake of doing right by his community, and his students and Lawanda.

This structure feels very rich and impactful. It’s less that these elements build up on one another and more that they are explored from so many angles by different characters. Something about that feels very authentic. It remains dramatic but feels real as opposed to say, Barry Allen seeing the “Hank Allen was here” sign on the Flash 411 airing the same night as Black Lightning 102. The fight at the end was really exciting and there are many questions I am excited to see answered in the coming episodes: how will Black Lightning deal with the police, when will Tobias and Black Lightning meet again, will Anissa go to her parents about her powers, is Inspector Henderson in Tobias’ pocket as well? 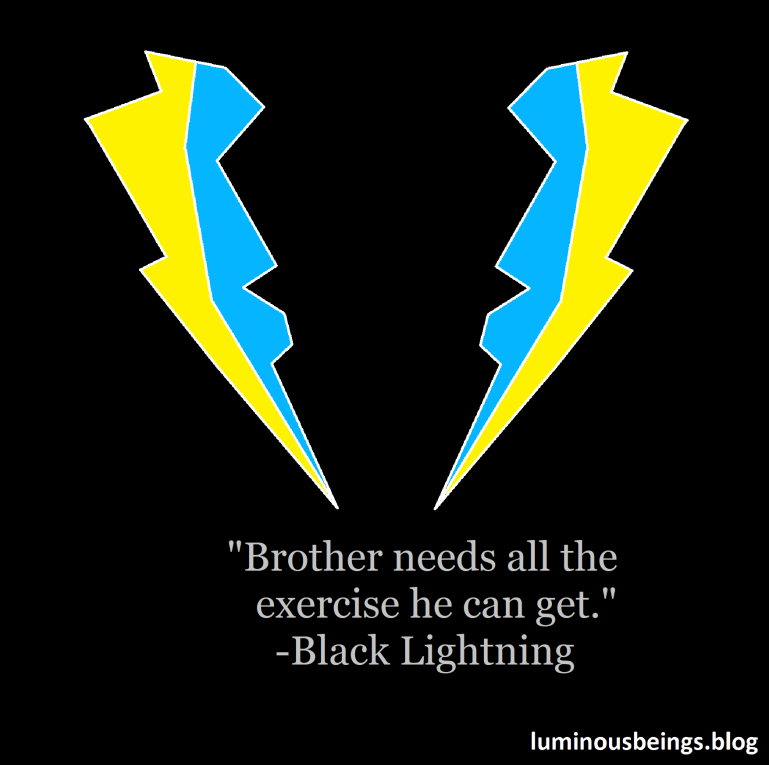